Lively Powering Up your Gadgets Outdoors

Solar generators are expensive. Everyone won’t afford solar generator for outings, but see it is not the only way to power up gadgets during camping. You have a big variety of solar panels and chargers that can fire up your devices directly from sun.

Those solar panels, as you can see, miss out batteries, but they are quite enough to lively power up your gadgets just as fast as the wall.

Here I am going to introduce you a cool, reliable solar panel that features a built-in junction box with smart-charging chip, which make direct charging possible, namely Goal Zero Nomad 20 Solar panel. This famous solar technology innovator sells many versions of the Nomad, which can be paired with any Goal Zero power pack like Yeti series.

What’s New? It is a simple 3-fold solar panel with an integrated junction box and smart-charging chip, which make it capable to directly power up handheld USB and 12 Volt gear from sun.

Why’s It? Yes, it is simply because you get an awesome option for direct charging of your devices from sun during outdoor life for a cheaper price.

Why Should You Buy?

Direct Powering: The primary reason why you as a camper can pick this device is its ability to directly fire up your devices from sun. A solar generator is expensive because it packs up a set of sophisticated stuffs like battery and inverter. Here for a cheaper price, you get a wonderful option to directly charge your handhelds from sun, but you can’t store energy for future use.

Pair with Power Packs: Goal Zero Nomad 20 Solar Panel is not only for direct charging of your devices. In itself, it is a normal solar panel that you can attach with any battery pack or solar generators. Goal Zero recommends all models of its Nomad series for its line of solar packs as well as solar generators. This piece is right fit for Goal Zero Yeti 150 lower-end solar generator.

Sturdy and Portable: It is made of sturdy materials and is very nice for portability since it is foldable to a tiny unit. Under sunlight, you can spread out its 3 solar panels in a way it gets better exposure to sunlight, and after use, you can fold it down to a small, back-pack friendly unit. 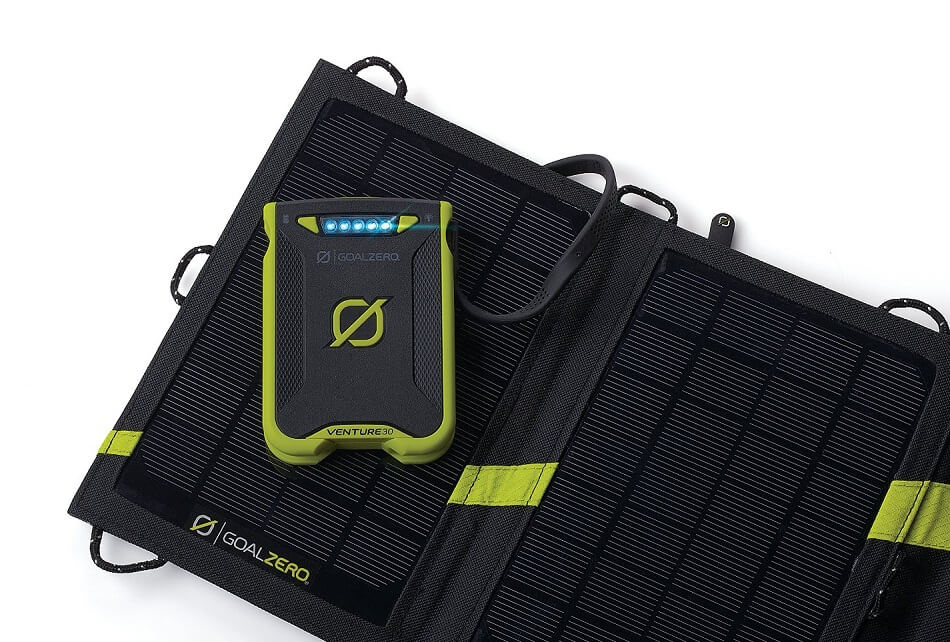 Goal Zero Nomad 20 Solar Panel is very popular among campers. On Amazon, it has grabbed over 50 reviews with a rating of 4.4 out of 5, as of writing this. Indeed, it indicates that it is a favorite one in the crowd. Coming from Goal Zero, a company that very seriously works on solar innovations, its popularity is not quite wonderful, however.

“If you are like me, and hitting the beaches, campground, fishing or backpacking, the Nomad 20 isn’t a huge weight issue, its fairly compact and will fit in a day pack easily,” says a customer named NYCamper on Amazon.com.

The world of solar is expanding up steady faster. We have great solar generators, chargers and solar panels for various applications today. The Goal Zero Nomad 20 Solar Panel is indeed a perfect pick for an outdoor enthusiast to keep his/her gadgets alive always. It works well for all the commonly used handhelds like smart phones, tablet, GPS and digital cameras.